We live in what has been called a "post-truth era," in which people ignore facts and expertise, and simply believe whatever they want to believe.  Fake news - false information that is widely shared on the internet - has become a massive problem for all of us, and it shows no sign of slowing down.

Whether it's someone unintentionally sharing inaccurate information through social media, a fabricated story that's being disseminated to intentionally mislead readers, a politician lying repeatedly to the American public, or conspiracy theories about vaccines and voter fraud, the explosion of fake news is harmful to a properly functioning society and democracy.  After all, we can't make good decisions if we don't have accurate, factual, and truthful information, and fake news deprives us of exactly that.  And, of course, having inaccurate or false information harms your ability to succeed at the university level, as well.

This Libguide provides you with definitions of different types of fake news, along with strategies and resources that can help you identify it, avoid it, and locate accurate information that can help you make informed decisions and serve as worthwhile sources for your research assignments.

Many of the problems we have with fake news stem from the sheer volume of information we're constantly bombarded with through our phones, computers & tablets. Fake news spreads most effectively through sharing on social media, and yet studies have shown that a majority of links shared through Twitter and Facebook are not read first; people simply see a sensationalistic headline that gets an emotional rise out of them, share it to their social network without reading, and are on to the next story.  It's up to us to sort through the information we receive, to sift out the good and throw away the bad, to embrace facts and truth while rejecting fake news and propaganda, and only passing along through social media those stories we are certain are accurate.  In the words of the Stony Brook Center for News Literacy, "It is a positive development that the public is now able to share their knowledge with others [via the internet], but as Uncle Ben told Peter Parker in Spider-man, 'with great power comes great responsibility.'"

When engaging with information, be it news stories or research for a class project, we should always try to maintain an open mind and a healthy level of skepticism so that we make sure our information source actually proves the points it arguing.  Avoid the following behaviors that can lead to blind acceptance of fake news:

CONFIRMATION BIAS--the habit of automatically believing information that agrees with our preexisting views, regardless of whether the source is valid.  The slightly different Desirability Bias is accepting information because it confirms what we WANT to believe.

SELECTIVE EXPOSURE--actively seeking out information that falls in line with our preexisting beliefs, while never seeking information that differs from them.  This can lead to living in an:

ECHO CHAMBER--only being exposed to information that agrees with our views so that we just have our biases constantly reflected back upon us, rather than getting outside perspectives.

INFORMATION AVOIDANCE--the opposite of the above behaviors; actively avoiding any information that might disagree with, and make you question, your personal views.

SATISFICING--the habit of only finding just enough information to meet our immediate needs, without going beyond that threshold so we have a greater understanding of the entire issue at hand. 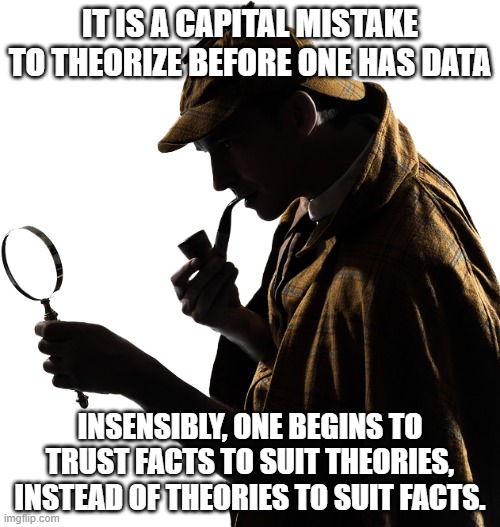 Don't start with a conclusion and then try to find facts to fit it.  Instead, let the facts you find lead you to your conclusions.

Arthur Conan Doyle, "A Scandal in Bohemia," in The Adventures of Sherlock Holmes (London: Octopus Books, 1987), 17.